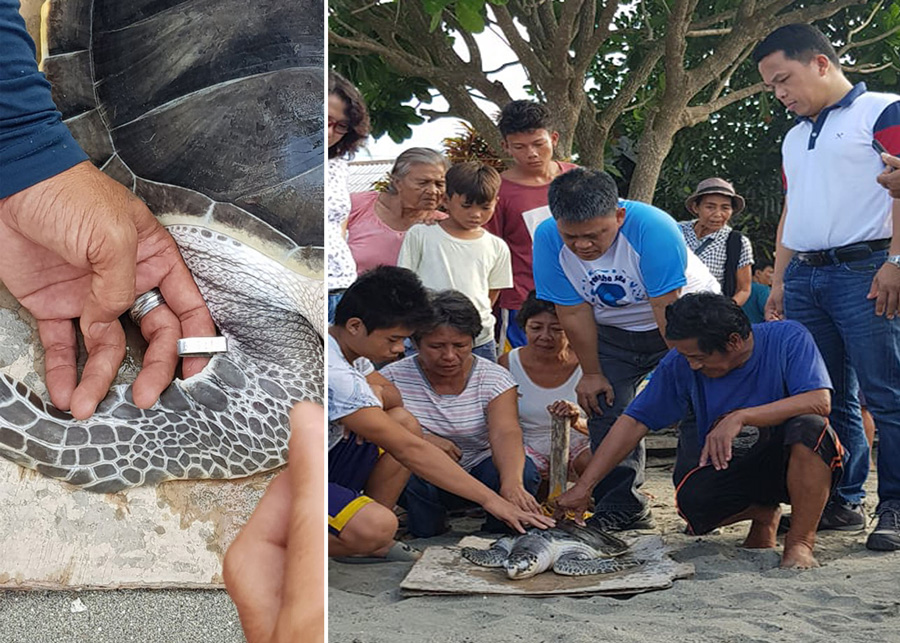 Townfolk of Glan, Sarangani bid farewell to their adopted pawikan(left photo) they named “Aryana,” to mean “spotless lady”, as the 66-lbs. female Olive Ridley (Lepidochelysolivacea) is released back to the sea after almost a year of recovery under the care of NenaEbba (in striped blouse) who rescued her from a net of a fish trawler that anchored near her house in Barangay Burias, Glan in July 2018. DENR-Region 12 Executive Director NiloTamoria (in blue-white shirt) led the release in simple rites last May 23 as part of DENR’s sea turtle conservation program. Prior to her release though, Aryana was attached with a metal tag at its flipper (right photo) by wildlife officers for tracking purposes. At least 39,000 pawikanhatchlings had been released into the Sarangani Protected Seascape coastlines since 2015 from Sarangani’s three pawikanhatchery centers in Maitum, Maasim and Glan towns. Sea turtles play an important role in the marine food chain as their diet includes sea grasses and jellyfish, thereby keeping the marine ecosystem balanced and enables small marine organisms to thrive . ###