The Department of Environment and Natural Resources (DENR) has named six more important water bodies across the country as water quality management areas (WQMAs) to better protect them from pollution.

This brings to 31 the total number of WQMAs nationwide, 25 of them were designated under the Aquino administration.

“This is part of our effort to keep the country’s waterways clean and ensure the sustainable water supply for Filipinos,” Paje said.

The environment chief said the designations would help determine what control measures to institute to effectively achieve water quality objectives and improvements in those areas.

WQMAs require serious protection and management action by the local government and its stakeholders.

All six newly designated WQMAs have a combined area of 221,376 hectares of inland water systems, including land portions surrounding the water bodies.

Four of these water bodies are critical to aquifers and irrigation. These are the Naguilan River System, Talomo River, Ayala River and Lake Sebu.

Meanwhile, the designation of Cañas-Maalimango Rivers as WQMA strengthens government compliance with the Supreme Court mandamus on the cleanup of Manila Bay because the two rivers serve as major transport route of pollutants from establishments within the Cavite area.

The Tagoloan River Basin, on the other hand, serves as a repository of all water that stream through from the watershed areas of Bukidnon and Misamis Oriental provinces.

Under Republic Act No. 9275 or the Philippine Clean Air Act of 2004, the DENR, in coordination with the National Water Resources Board, to designate certain areas as WQMAs using appropriate physiographic units such as watershed, river basins, or water resources regions to effectively enforce its provisions and improve the water quality of water bodies.

The law seeks to provide a decentralized management system for water quality protection and improvement of river systems.

A total of 25 WQMAs have been designated by the DENR since President Benigno Aquino III came into power in 2010, as against the five WQMAs declared under the previous administration.

The Clean Water Act tasks the DENR to create a governing board for each WQMA, which is chaired by a regional director of the DENR’s Environmental Management Bureau (EMB). Its members include the mayor and governor of the concerned local government unit and representatives of relevant national government agencies, duly registered non-government organizations, and business and water utility sectors.

The governing board serves as a planning, monitoring and coordinating body. It also reviews the WQMA action plan prepared by the EMB.

The DENR and the stakeholders address the water quality problems, sources of pollution, and the beneficial use of the receiving water body. They also determine what control measures to institute to effectively achieve water quality objectives or improvements. ###

DENR TO THE PUBLIC: BIKE, HIKE AND PLANT A TREE FOR MOTHER NATURE

The Department of Environment and Natural Resources (DENR) invites all Filipinos who have a passion for riding bicycles and taking care of the environment from all sectors to join the “Bike. Hike. Plant. Celebrating 153 years of Philippine Forestry Service” on June 25, 2016. Registration is still on-going.

The event is being spearheaded by the Forest Management Bureau (FMB), a staff bureau under the DENR, as part of its sesquicentennial anniversary celebration.

“The forestry service in the country has come of age as foresters are now regarded as significant players in nation-building as evidenced by the enactment of Republic Act (RA) 10690, otherwise known as the Forestry Profession Act of 2015,” DENR Secretary Ramon J. P. Paje said.

Looking back, Paje said that while the forestry sector had contributed immensely in the economic growth of the country, such gains had its consequences resulting in the degradation of upland areas which, in turn, impoverished the people in the countryside due to low productivity.

But interest in forestry has come to fore once again in the light of climate change.

“The restoration of forests remains one of most viable mitigation measures against the impacts of climate change. It is for this reason that President Aquino expanded the implementation of the National Greening Program (NGP) up to 2028 to continue with the reforestation of the remaining denuded and degrade areas of the country,” Paje stressed.

NGP is the massive reforestation program of the Aquino administration. Started in 2011, it sought to plant 1.5 million hectares by end of 2016.

According to Paje, protecting the environment is as essential as taking care of one’s health, so the volunteers will be able to maximize their participation in the activity.

The goals of the event include widening the network of forestry champions and including the bikers and hikers in rehabilitating and protecting the Philippine forests through the promotion of responsible tourism and proactive forestation.

“By planting trees through these activities, we will be able to achieve a carbon-free Philippines gradually,” Paje points out.

The Philippines made a commitment during the United Nations Climate Change Conference (COP21) in Paris, France last year to reduce the carbon emissions by up to 70% through the Intended Nationally Determined Contributions or INDCs.

“As a highly vulnerable country, the Philippines has committed early to contributing its fair share to the global action,” Paje said.

Planting trees is one of the methods used for carbon mitigation. Accordingly, the carbon sequestration capacity of a tree is generally much faster on its early age, one reason why tree planting is highly encouraged.

Expected participants include 100 volunteer riders from 50 corporate, government, media, and private bike organizations. There will also be an additional 50 volunteer hikers from various agencies who will receive the seedlings and plant these on the site. Some 400 cyclists will also join the volunteer riders to show their support for the delegation.

Route starts from the DENR’s Environmental Management Bureau parking lot in Quezon City up to the Mt. Sainai, Pintong Bocaue in San Mateo, Rizal, which is a part of the Upper Marikina River Basin Protected Landscape. Assembly time and distribution of planting kits and seedlings will be at 4:00 AM.

The kits that will be given to the participants will be placed in drawstring bags made from nylon silverback fabric. The bag has two pockets which can hold the two seedlings. These two seedlings will be carried by each of the volunteer cyclist up to the planting site.

“We hope that through this biking, hiking and tree planting event, the volunteer cyclists, while sustaining the pink of their health, will be able to entice people from other sectors to meet our carbon emission goals and finally achieve our collective goal for the environment,” Paje said. ### 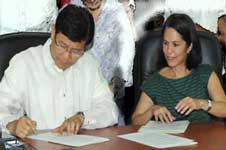 “In behalf of the entire DENR community, I would like to congratulate and welcome the appointment of Ms. Gina Lopez as the next secretary of the department,” Paje said.

Paje said he could not think of anyone better to succeed him in the DENR than Lopez whose passion and track record on various environmental causes cannot be understated.

“I’m sure the incoming DENR Secretary will do a good job. I feel that the department is in good hands,” said Paje, who is scheduled to step down from office on June 30.

Lopez announced on Tuesday that she had decided to accept the offer of incoming President Rodrigo Duterte to lead the DENR, the primary government agency responsible for the conservation, management, development and proper use of the country’s environment and natural resources.

A noted environmentalist, Lopez is currently the chairperson of the ABS-CBN Lingkod Kapamilya Foundation and the Pasig River Rehabilitation Commission. ###

Nearly 40 natural caves across the country have been placed under the protection and management of the government, the Department of Environment and Natural Resources (DENR) said.

The DENR recently classified an additional 39 caves, bringing to 454 the total number of caverns that are now part of the country’s natural wealth and therefore require sustainable management and protection.

DENR Secretary Ramon J.P. Paje said the classification, as embodied in Memorandum Circular 2016-05 that he signed, was necessary to ensure that the caves would be “preserved and properly enjoyed by the public.”

“The directive will help enhance public awareness and appreciation that caves are part of our natural resources because of their significance as ecosystems which host various forms of wildlife,” Paje explained.

“It also helps protect the geological, archaeological, historical and cultural values these caves carry, and helps sustain them for the enjoyment of future generations,” he added.

The 39 caves are distributed as follows: 6 in the Cordillera Administrative Region; 7 in Ilocos Region; 2 in Cagayan Region; 15 in Bicol; 3 in Davao del Norte province; and 6 in Region 12 or SOCCKSKARGEN.

Nine caves were categorized as Class I for their delicate and fragile formations, threatened species and extremely hazardous conditions being closed to ecotourism. Activities allowed within these caves are limited to mapping, photography, and educational and scientific purposes.

Categorized as Class I caves are the Karilagan and Aswang caves in Catanduanes, and the Kasilac Bat Cave in San Isidro, Davao del Norte.

A total of 23 caves were classified as Class II, including the Sorolla Cave in Koronadal City. Class II caves have portions with hazardous conditions, as well as sensitive geological, cultural and historical values or ecosystems. These sections may be declared closed, while the other portions may be open to experienced spelunkers or guided visits.

Seven caves, including the Dalangin Cave in Camarines Sur and the Sibud-Sibud Cave in Abra, were identified as Class III or those safe for inexperienced, yet expert-accompanied visits. These caves may also be utilized for economic activities like extraction or collection of guano or bird’s nest.

The DENR’s Biodiversity Management Bureau has been studying the caves prior to their classification, pursuant to Republic Act No. 9072 or the National Caves and Cave Resources Management and Protection Act.

The law mandates the DENR to formulate, develop and implement a cave management program to conserve and protect caves and cave resources. #

The thriving local automobile industry is forcing the Department of Environment and Natural Resources (DENR) to more strictly monitor and assess air quality in the country, particularly in Metro Manila.

“The increase in purchasing vehicles is one of the reasons why we have to become stricter in monitoring the air quality and the smoke emissions,” Paje said, in a speech read by Environmental Management Bureau Assistant Director Eva Ocfemia during the Clean Air Forum held Tuesday at the DENR’s social hall in Quezon City.

In 2015, the Philippine automotive industry posted total vehicle sales of 323,928 units, the highest ever in cumulative local sales surpassing the previous record from 2014 at 269,841.

Paje noted that 70 to 80 percent of air pollution in Metro Manila still comes from vehicle emissions.

He said the DENR, through its Environmental Management Bureau, had successfully installed air quality monitoring stations in each of the 17 local government units in Metro Manila.