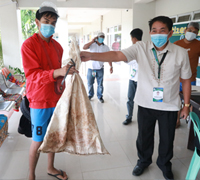 Meet Teodoro F. Yanuyan III of Dumalinao, Zamboanga del Sur who is known in his neighborhood as the “Snake Man”.
Last Tuesday afternoon of this week, Yanuyan went to the Department of Environment and Natural Resources (DENR) Zamboanga Peninsula regional office in Balintawak, Pagadian City to turn-over a matured Samar Cobra (Naja samarensis) locally known as “Dupong”, a highly venomous species of spitting cobra native to the Visayas and Mindanao islands.
Yanuyan narrated that neighbors always call on him whenever there are snakes found in their houses or garden. In this particular case, his neighbor called him to help catch the snake who was trapped in a garden net before it could harm anyone especially children.
The veterinary student believes that the snake was disturbed in its habitat following a heavy downpour the previous night.
“We are fully aware that all wildlife, including snakes are protected under Republic Act 9147 or the Wildlife Resources Conservation and Protection Act as we have learned this during an information campaign conducted by the DENR in our community”, Yanuyan said.
The Samar Cobra was received by OIC Chief, Enforcement Division Heracleo M. Calasang, Jr., who praised Yanuyan for his noble act. It was immediately brought to the Regional Wildlife Rescue Center in Baclay, Tukuran to ensure that it is fit and healthy before its release back to wild. 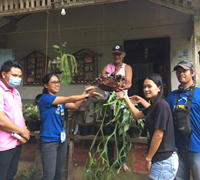 A critically endangered wild plant was voluntarily surrendered to the Department of Environment and Natural Resources (DENR)- Community of Environment and Natural Resources Office (CENRO) of Piñan, Zamboanga del Norte headed by Dr. Adelaida R. Borja on October 1.
Mr. Galileo Emperado, Jr. and Ms. Fretzie Catalan, residents of North Poblacion, Piñan, voluntarily surrendered a Staghorn Fern (Platycerium coronarium) to CENRO Piñan.
The said plant is listed as Critically Endangered under DENR Administrative Order 2017-11.
According to the report, Mr. Emperado bought the Staghorn Fern from Siocon, Zamboanga del Norte and cared for it for almost five (5) years. He thought of selling the plant to raise a small amount especially during this time of pandemic thus, he asked Ms. Catalan to create a Facebook post for it. Fortunately, they encountered a Facebook post from the DENR Zamboanga Peninsula regarding the warning on the ban on illegal collection and trade of wild plants. They then informed the Office that they have a Staghorn Fern and turned-over the said wild plant.
The illegal collection and trade of endangered wild plants is prohibited under Republic Act 9147 or the Wildlife Resources Conservation and Protection Act and violators may face fines and imprisonment. 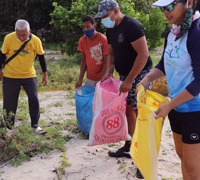 DENR IX headed by RED Crisanta Marlene P. Rodriguez kicks off the celebration of International Coastal Cleanup 2020 with a beach cleanup and SCUBAsurero at Murcielagos Island Protected Landscape and Seascape in Labason, Zamboanga del Norte.
Every 3rd Saturday of September, countries around the world participate in this coastal cleanup. With the COVID-19 pandemic, this year's theme "Safe Oceans Starts At Home" highlights behavioral change as an integral factor in protecting the world's oceans.
Other partners who participated in the activity include the LGU Labason headed by Mayor Eddie Quimbo, Philippine Coast Guard, Bureau of Jail Management and Penology, Tau Gamma Phi, Philippine Army, Department of Agriculture 9 and community residents. “The collection of wild flora directly from the forest, especially those considered as threatened species, without permit is prohibited under Republic Act 9147 or the Wildlife Resources Conservation and Protection Act.”

This was announced by Department of Environment and Natural Resources (DENR) Zamboanga Peninsula Executive Director Crisanta Marlene P. Rodriguez who said plant poachers caught gathering wild plants in the forest without a permit can be charged by her office under this law.

Director Rodriguez added that Department Administrative Order No. 2017- 11 stipulates that “collection and trade of threatened species are prohibited unless such acts are covered under a permit issued by the DENR and the species are found in areas under a valid tenure instrument or a parcel of land covered by a title under the Torrens System.”

"Furthermore, collection of plant species within Expanded National Integrated Protected Areas System (E-NIPAS) sites are strictly for research purposes and would require Gratuitous Permits issued by the DENR", she said.

If the wild plants collected are classified as critically endangered, violators can face imprisonment from 6 to 12 years and a fine of Php 100,000 to 1,000,000. Some examples of plants considered as critically endangered are the Giant staghorn fern or Capa de Leon (Platycerium grande), Staghorn fern (Platycerium coronarium) and the Waling-waling (Vanda sanderiana). Examples of other threatened species are the Green Velvet Alocasia (Alocasia micholitziana), Kris plant (Alocasia sanderiana) and the Zebra Plant (Alocasia zebrina). For a complete list, you may download DENR DAO 2017-11 at http://bit.ly/DENRThreatenedPHPlants.

Science Direct studies indicate that aside from harboring crop viruses and other pathogens, wild plants act as important reservoirs and sources of insects, mites, and nematodes. Certain wild plant species may be indispensable to a vector as its alternate host, acting as an essential intermediary in the ecology of the virus.

DENR IX cautions the public on the said illegal practices and advises the public to secure proper permits in the collection and trade of plant species.

Director Rodriguez has instructed the different field offices to strengthen surveillance and monitoring of illegal plant trade and strictly impose fines and penalties on offenders.# 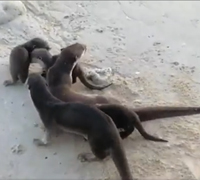 The pair of Smooth-coated Otters (Lutrogale perspicillata) reported last May of this year at Taganak Island in Tawi-Tawi surprised island residents last week when they emerged from their den accompanied by 3 pups.
This was announced by Department of Environment and Natural Resources (DENR) Region IX Executive Director Crisanta Marlene P. Rodriguez as she points out that this is the first time that these Otters, locally known as “HanjingLaut”, were seen outside their normal area of distribution.
“Studies indicate that Smooth-coated Otters are originally from Malaysia and Indonesia and it is just surprising to know that they have now reached Taganak Island”, Director Rodriguez said.
Director Rodriguez said that she received a report from Turtle Islands Wildlife Sanctuary (TIWS) Protected Area Superintendent MindaBairula stating that residents spotted the Otters with their pups frolicking in the sand.
The report narrated that it was on July 31 that a resident living near the shoreline reported to their office that she heard sounds of newly-born animals coming from the den of the Otters. On August 17 a Protected Area Management Office (PAMO) staff spotted the baby Otters coming out from the den. With the help of personnel from the Philippine National Police Taganak Municipal Station, they were able to video-document the parent Otters and the pups playing along the shoreline.
“I have also instructed PASu Bairula, who is on site, to record the biology, habits and behavior of the Otters and continue coordinating with our office as we are also consulting with experts from the Biodiversity Management Bureau and the International Union on the Conservation of Nature (IUCN) Otter Specialist Group” she said.
The lady director also mentioned that her office is constrained from sending technical experts to Taganak Island to conduct further studies on the Otters because of the limited trips, transportation and quarantine protocols due to COVID 19.
Taganak residents first reported the sighting of 2 Smooth-coated Otters playing in their shoreline last May 14 and has stirred their curiosity as this is the first time that they have seen these animals in their island.
DENR, through PAMO, regularly conducts information campaigns among the residents to help take care of the Otters and avoid close contact during this maternity period as the parent Otters get very protective of their pups.
Taganak Island is part of the Turtle Islands Wildlife Sanctuary which is Southeast Asia’s largest marine turtle sanctuary and a declared protected area under Republic Act 11038 (Expanded National Integrated Protected Areas System Law). Photos and video courtesy of Personnel from the Taganak Municipal Police Station