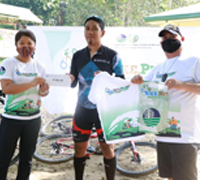 DENR IX thanks everyone who has been a part of our BIKE. HIKE. PLANT. We highly appreciate you all for helping in the rehabilitation and protection of our forest.
Congratulations to the following participants:
The first 3 participants to complete the 300km ride and plant a tree at the MMFN in Baclay, Tukuran, ZDS
First Placer - Faizal Y. Palti
Second Placer - Tristan Jon C. Abarquez
Third Placer - Gerardo C. Sanchez
Consolation prizes will also be given to the following for completing the 300km ride and for planting a tree at the MMFN, Baclay, Tukuran, ZDS.
1. Abdullah, Hamser K.
2. Andagan, Frainnel Ane M.
3. Enriquez, Mark P.
4. Ibba, Erifzar S.
5. Ibba, Noraine A.
6. Mangakoy, Yasmin D.
7. Mapiso, Nelson O.
8. Susi, George Gabriel P.
Join us tomorrow (June 22, 2021) at the MMFN in Baclay, Tukuran, ZDS and claim your prizes and freebies as well as plant a tree with us.
See you!
IKAW. AKO. TAYO ANG KALIKASAN.
#TayoAngKalikasan
#ArborDay
#158yearsofPHforestry 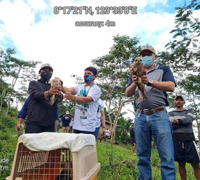 The Department of Environment and Natural Resources IX (DENR) Regional Wildlife Rescue Center marks the celebration of World Environment Day as it releases its 100th rehabilitated wildlife in Brgy. Don Eleno, Sergio Osmeña Sr., Zamboanga del Norte (ZDN) on June 5, 2021.
The event was spearheaded by DENR IX Regional Executive Director Crisanta Marlene P. Rodriguez together with Assistant Regional Director for Technical Services Ronald D. Gadot, Piñan CENR Officer Adelaida R. Borja, Representative of ZDN Provincial Governor Robert Uy Provincial Administrator Mr. Joey Alfonso Q. Bernad, Sergio Osmeña Municipal Environment and Natural Resources Officer John G. Fuerzas, Don Eleno Brgy. Captain Edilberto Abila, personnel from the ZDN-Provincial Information Center, and personnel from DENR IX regional, provincial and community offices.
Released back to the wild were a pair of juvenile Brahminy Kite (Haliastur indus) and a juvenile Pinskers Hawk-eagle (Nisaetus pinskeri). The species mentioned were the 98th, 99th and 100th releases made by DENR IX among the wildlife rescued and rehabilitated at the Regional Wildlife Rescue Center in Baclay, Tukuran, Zamboanga del Sur.
DENR DAO No. 2019-09 and the International Union for Conservation of Nature (IUCN) listed the Pinsker’s Hawk-eagle as Endangered and the Brahminy Kite as Other Wildlife Species (DENR DAO 2019-09) and Least Concern (IUCN).
DENR 9 RED Rodriguez said that the releasing of wildlife in Sergio Osmeña signified the three environmental celebrations: June 4-10 as Philippine Eagle Week, June 5 as World Environment Day and the whole month of June as Environment Month.
“We would like to tell the people that our wildlife should remain in the wild. Let’s not capture them. If there are instances that you see or observe birds that are stranded, injured or sick, please report it to our nearest CENR Office or you can go to your respective Local Government Unit. Just a reminder, that the threat of Bird Flu is still there, so please don’t touch the birds with our bare hand, but instead, report it to the authorities for they know what to do to the captured wildlife,” she added.
Community education and public awareness on the illegal acts under Republic Act 9147 otherwise known as the Wildlife Resources Conservation and Protection Act was also conducted through the distribution of fliers among the barangay residents for them to be informed of the “dos and don’ts” when encountering the released wildlife species.
Since April 2019, the Regional Wildlife Rescue Center (RWRC) has been fully functional with its major operational activities – rescue, rehabilitate and release. In partnership with the Department of Agriculture IX and the Zamboanga del Sur Provincial Veterinary Office headed by Dr. Anita J. Chua, the RWRC has been providing medical attention, shelter and rehabilitation to the rescued wildlife prior to their release back to their natural habitat.
World Environment Day is celebrated annually on June 5 as the United Nations’ principal vehicle for encouraging awareness and action for the protection of the environment. With this year’s theme, “Reimagine. Recreate. Restore”, the releasing of rescued and rehabilitated wildlife is one way of supporting ecosystem healing and restoration.
The month of June of each year is declared as Philippine Environment Month under Presidential Proclamation 237 to generate awareness and advocacy towards the protection, conservation and sustainable development of our environment and natural resources.

TIWS ADMINISTRATION AND MANAGEMENT UNDER BARMM-MENRE 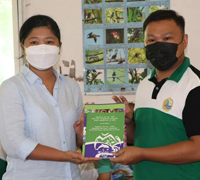 The administration and management of Turtle Islands Wildlife Sanctuary (TIWS) in Tawi-Tawi is now with the Bangsamoro Autonomous Region in Muslim Mindanao – Ministry of Environment, Natural Resources and Energy (MENRE) during a simple turn-over ceremony on 23 May 2021 in Baguan Island, Tawi-Tawi pursuant to the Bangsmoro Organic Law (BOL).
The symbolic turn-over was conducted between Department of Environment and Natural Resources (DENR) Region IX Regional Executive Director Crisanta Marlene P. Rodriguez, as Protected Area Management Board Chairperson, and MENRE Forest Management Services Director Abdul-Jalil S. Umngan, the designated Head of Delegation for the activity in Turtle Islands and official representative of BARMM Senior Minister and MENRE Minister Abdulraof A. Macacua.
Turtle Islands is globally recognized as the most important nesting ground for the endangered Green Sea Turtle and the critically endangered Hawksbill Turtle.
RED Rodriguez, in her message, recalls how TIWS came under DENR IX’s management in 1996 when it became one of the ten priority protected areas under the Conservations of Priority Protected Areas Project (CPPAP) and was institutionalized and declared a protected area named TIWS under Presidential Proclamation No. 171 on August 26, 1999 pursuant to Republic Act 7586 known as the National Integrated Protected Areas System (NIPAS) Act of 1992 and later on became one of the 94 newly-legislated Protected Areas Under RA 11038 or the ENIPAS Act of 2018.
“We have cherished our role in TIWS proving time and time again that although distance has always been a challenge, it was never regarded as a hindrance to our efforts to protect and conserve not just wildlife but more so the habitat that these species depend on for their survival”, RED Rodriguez said.
She also relayed her gratitude to the different stakeholders such as the Local Government Units of the Municipality of Turtle Islands and the Province of Tawi-Tawi; law enforcement partners such as the Philippine Navy, Philippine Coast Guard, Philippine National Police, PNP-Maritime, and Philippine Marines; non-government organizations; Protected Area Management Board members; and to the DENR family and Wardens for their collaborative effort, hard work and dedication for the management and protection of TIWS.
MENRE Minister Abdulraof A. Macacua, in a message delivered by Director Umngan, said that it is in the mandate of MENRE to formulate policies and guidelines and will implement programs, activities and projects for the protection and preservation of biological diversity and the endangered flora and fauna in the Bangsmoro region.
“Rest assured that our mission now includes the protection and conservation of Turtle Islands Wildlife Sanctuary, its biodiversity, flora and fauna, and the habitat that’s inseparable from the survival of the species relying on the beauty of the islands,” he said.
Turtle Islands Wildlife Sanctuary is composed of six islands namely Boan, Taganak, Baguan, Great Bakkungan, Lihiman and Langaan under the municipality of Turtle Islands in Tawi-Tawi. 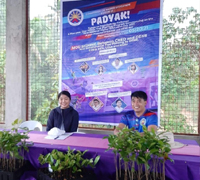 The Department of Environment and Natural Resources Region 9 signed the Memorandum of Understanding (MOU) between the Commission on Higher Education (CHED) Region 9 for the one (1) million tree growing activity in the next five years. The signing was witnessed by the Zamboanga Del Sur Provincial Governor Victor Yu and the 1st District Congresswoman and Deputy Speaker Divina Grace Yu.
This is in commemoration of the 1st National Higher Education Day and the 27th founding anniversary of the Commission on Higher Education (CHED) which commenced on May 17 until 21, 2021 with the theme: PADYAK! Tungo sa Paghilom ng Kalikasan";
A Five-year, One Million Tree Planting Program.
To seal the agreement, an estimated total of 5,000 seedlings of indigenous and fast growing tree species were planted in the region by some representatives of the Higher Education Institutions (HEIs) and Local Chief Executives (LCEs).
#TayoAngKalikasan
#WeArePartOfTheSolution 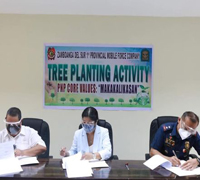 A Memorandum of Agreement (MOA) for the "Adopt-A-Mountain" program was signed by the Department of Environment and Natural Resources (DENR) Region IX represented by Regional Executive Director Crisanta Marlene P. Rodriguez and the Philippine National Police Regional Office 9, Zamboanga del Sur Provincial Office, 1st Provincial Mobile Force Company (ZS 1st PMFC) represented by the Force Commander PLTCOL Bonifacio B. Arañas Jr. today May 10, 2021 at DENR Regional Office, Balintawak, Pagadian City.
DENR IX Regional Executive Director Crisanta Marlene P. Rodriguez welcomes this partnership as this is will boost reforestation efforts of the department.
"The participation of the PNP in joining with us in regreening our mountains is a sure sign that more people are beginning to care for the protection and conservation of our environment", RED Rodriguez said.
"Hopefully, this partnership shall serve as a beacon for other organizations to emulate", she added.
DENR Administrative Order No. 98 dated October 01, 1998 stipulates that the "Adopt-A-Mountain" program shall aim to accelarate the revegetation / regreening of denuded/ degraded mountains and range lands so as to improve water yield capacity and timber production.
A total of three (3) hectares at the Baclay-Pulacan Reforestation Site in Baclay, Tukuran, ZDS were alloted for PNP personnel to conduct their greening efforts.
Both parties recognize the importance of collaboration and partnership in order to achieve the objectives and the direction to the Core Values (Makakalikasan) of their organizations.