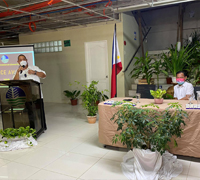 “The sacrifices and service we give to the government is also our way of sacrifice and service to our family”, a message given by In Charge Office of the Regional Executive Director Forester Ronald D. Gadot during the Service Award 2021 conducted by the Department of Environment and Natural Resources (DENR) Region IX on October 19, 2021 at DENR IX Regional Office, Balintawak, Pagadian City.
Service Award 2021 is in line with DENR IX PRIME-HRM Rewards and Recognition Program, which is one way of the department to show its recognition and appreciation for its personnel who have rendered 30 years and above of government service. This is also a way to give gratitude to the personnel for their sacrifice and service, as well as to boost their morale that their efforts are being acknowledge.
ARD for Management Services Dr. Dante Oporto said a total of 53 personnel were awarded in the regional office, six of which received bronze pin serving 30-34 years, 16 received silver serving 35-39 years, and 31 received gold pins for serving 40 years and above.
Similar award were also given to DENR IX personnel in the field offices wherein a total of 32 DENR IX field office personnel received gold pins, 60 received silver pins, and 91 received bronze. Together with the pins all awardees also received certificates.
DENR IX personnel will continue to pursue its dedicated service towards the conservation and protection of our environment and natural resources for the benefit of our country.
#TayoAngKalikasan
#DENRZamPen
#ServiceAward2021 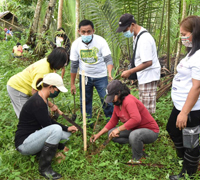 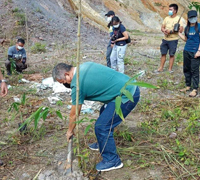 Personnel from the Community Environment and Natural Resources Office (CENRO) of Manukan, Zamboanga del Norte led by CENR Officer George Laolao, in collaboration with DENR-PENRO Zamboanga del Norte together with the members of the Peoples Organization of Bamboo Integrated Works Association, Dagohoy Subanen Hillside Farmers Association including the BLGU officials of Dagohoy and Tinaplan, Municipality of Sindangan planted 230 giant bamboo culms along the hillside portion of Barangay Dagohoy, Sindangan, Zamboanga del Norte on Sept 17, 2021.
The activity was conducted to celebrate World Bamboo Day on September 17 with the theme "Alay ng Bayan sa Inang Kalikasan, Kawayan".
Before the planting activity, a lecture was given by resource speakers from the Ecosystems Research and Development Bureau - Forest and Wetland Research Development and Extension Center on the potentials, opportunities and various uses of Bamboo products as well as its propagation, production, plantation establishment, maintenance and care to increase their level of awareness and support to Bamboo.
Bamboo is considered as the green gold because of its importance and variety of uses. It is highly recognized as the best alternative for wood and also helps in climate change mitigation by storing large amount carbon dioxide. It has been the advocacy of DENR Sectary Roy A. Cimatu to use bamboo species in the rehabilitation of degraded forestlands.
#TayoAngKalikasan
#DENRZamPen
#PhilippineBambooDay2021 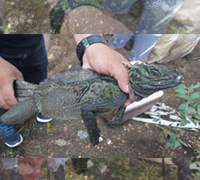 Zamboanga City - An Environmental Law Enforcement team from the Department of Environment and Natural Resources (DENR) Region IX and Philippine National Police confiscated two (2) Philippine Sailfin Lizards (Hydrosaurus pustulatus), locally known as “Ibid”, yesterday August 5, 2021 in Barangay Victoria, Zamboanga City.
The seizure of the wildlife was witnessed by Victoria Barangay Chairman Emelito B. Ziga, PNP Sangali Police Station-3 personnel under PLT Hareim A. Gani and the wife of the alleged suspect (name witheld).
DENR IX Regional Executive Director Crisanta Marlene P. Rodriguez said that her office ordered an investigation after receiving an anonymous call from their hotline number on the presence of two Philippine Sailfin Lizards being offered for sale at an exorbitant price.
“ This is a clear violation of Section 27 of Republic Act 9147 or the Wildlife Resources Conservation and Protection Act wherein it states that it is unlawful for anyone to collect, possess or sell wildlife without the necessary permit from the DENR,” Director Rodriguez said.
Initial investigations made by the team headed by DENR IX Enforcement Division Chief Cidur Julsadjiri, together with Provincial Environment and Natural Resources Office (PENRO) Zamboanga Sibugay and Community of Environment and Natural Resources Office (CENRO) Zamboanga City personnel, revealed that the wildlife was being kept in a pen and was just waiting for the buyer who is paying 50 million pesos as this will be shipped to Malaysia.
The wife of the suspect could not produce any permit or documents allowing them to keep the wildlife. She vehemently denied any involvement in the business of her husband as she informed the team that the wildlife was only entrusted to them by a friend of her husband.
“ A criminal complaint will be filed by our office against the suspect or suspects at the Office of the City Prosecutor of Zamboanga City upon termination of our investigation report”, Julsadjiri said.
The Philippine Sailfin Lizards are now in the custody of CENRO Zamboanga City and will be released back to its habitat when deemed fit and healthy.
Philippine Sailfin Lizards are endemic in our country and classified as Vulnerable under the International Union for Conservation of Nature (IUCN). Their main threats are habitat loss, being hunted for food and collection for the pet trade.
The public is advised to report any illegal wildlife trade and other environmental crimes through DENR IX official social media page DENR Zamboanga Peninsula or through its Hotline number at 09481471250.
#stopillegalwildlifetrade
#TayoAngKalikasan
Photos by: RSCIG, DENR IX 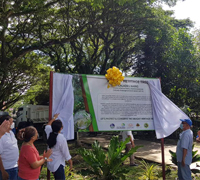 National and local government agencies join hands to prevent and stop the cutting of Kaladis Narig (Vatica elliptica) trees found in Barangay Calades, Alicia, Zamboanga Sibugay Province due to its critically endangered status.
This as the Department of Environment and Natural Resources (DENR) Region IX in efforts to conserve the remaining Kaladis narig species had a ceremonial unveiling of the signage for its protection at the entrance of the Municipal Hall of Alicia, Zamboanga Sibugay Province just recently.
The event was graced by DENR IX Regional Executive Director Crisanta Marlene P. Rodriguez, Zamboanga Sibugay 1st District Congressman Hon. Wilter “Sharky” Wee Palma, Provincial Board Member Jonathan Yambao, Alicia Mayor Remberto G. Sotto, Philippine National Police representatives, together with PENRO Zamboanga Sibugay & CENRO Imelda personnel.
In a message given by RED Rodriguez, she lauded the efforts of the barangay, municipality and the province on their actions in the protection and conservation of the remaining Kaladis narig. She added that the DENR will always be available for any support in the efforts of conservation and protection of this species.
Local officials and legislators expressed their support by passing ordinances that prohibits the cutting and/or destroying the remaining Kaladis Narig trees in the municipality.
Kaladis Narig is endemic to the Philippines and can only be found in the southern island of Mindanao, specifically in Barangay Calades in the Municipality of Alicia, Zamboanga Sibugay.
It is one of the tropical hardwood listed as critically endangered on the list of threatened Philippine plants and was once considered extinct until its rediscovery in the said municipality by the Energy Development Corporation (EDC).