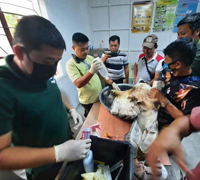 Personnel from DENR IX’s Regional Wildlife Rescue Center assisted the Bangsamoro Autonomous Region in Muslim Mindanao – Community Environment, Natural Resources, and Energy Office (BARRM-CENREO) Malabang in the rescue and retrieval of a Philippine Eagle (Pithecophaga jefferyi) in Barangay East Marogong, Lanao del Sur on February 9, 2022.
Upon successful retrieval, BARMM-CENREO Malabang, in coordination with the Philippine Eagle Foundation (PEF), turned over the Philippine Eagle named “Bangsa Bae” to the DENR IX Regional Wildlife Rescue Center (RWRC), as it is the nearest facility in the area that can provide immediate medical assistance and emergency care.
Upon the assessment of Dr. Anita Chua, resident veterinarian of the DENR IX RWRC and the Provincial Veterinarian of Zamboanga del Sur, Bangsa Bae required immediate surgical operation on its injured right wing as the bacterial infection is already widespread and could be fatal.
With the Philippine Eagle Foundation having the facility and the resources to perform the needed additional medical procedures for the injured Philippine Eagle, Bangsa Bae was transported to the Philippine Eagle Center in Malagos, Davao City on February 12.
DENR IX Regional Executive Director Datu Tungko Saikol said that he is grateful for the collaboration between different agencies and institutions in the rescue of the Philippine Eagle. “Our [wildlife] rescue center is ready to be of assistance in providing aid and we will continue our efforts to constantly develop and upgrade our operations and infrastructure.”
Classified as critically endangered, the Philippine Eagle is the country’s national bird. It can be recalled that the DENR IX RWRC released back to the wild a rescued and rehabilitated Philippine Eagle named Godod in the municipality of Godod, Zamboanga del Norte in January 2022.
The DENR IX RWRC is jointly operated by the DENR IX, Department of Agriculture IX and the Local Government Unit of Zamboanga del Sur through a Memorandum of Agreement.
To date, DENR IX has documented sightings and breeding of the Philippine Eagle in Baliguian, Godod, and Siocon in Zamboanga del Norte, Midsalip in Zamboanga del Sur and in Pasonanca Natural Park in Zamboanga City.
#TayoAngKalikasan
#DENRZamPen 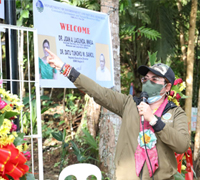 DENR Assistant Secretary Joan A. Lagunda attended a series of activities hosted by DENR IX during her visit to Zamboanga del Norte from January 26-27, 2022.
The visit of the Assistant Secretary for Field Operations – Western Mindanao, Metropolitan Environmental Office-East and Legislative Affairs and the concurrent Director of the Pasig River Coordinating and Management Office aims to monitor, validate and evaluate the various activities of the field offices in the region as well as dialogue with officials employees and other stakeholders and further develop and strengthen the DENR IX’s efforts in pursuit of the agency’s mandate.
Upon the arrival of the Assistant Secretary on January 26, she graced the inauguration of the DENR Strategic Checkpoint and Monitoring Station in Barangay Tolon, Rizal Zamboanga Del Norte. Aside from officials and personnel from the DENR IX led by RED Datu Tungko M. Saikol, in attendance also were members of Rizal Municipal LGU headed by Mayor Fiona Marie Manigsaca. The blessing of the monitoring station was officiated by Rev. Father Eudes D. Pañales from the Our Lady of Fatima Parish, Rizal, Zamboanga Del Norte.
Thereafter, ASec Lagunda proceeded to an interface with the DENR key officials and personnel from the regional and field offices. In her message, she reminded that DENR employees should serve with the highest degree of honor and standard, to constantly seek collaborative opportunities with stakeholders and innovate programs and projects that will elevate the level of service provided by the agency.
DENR IX Regional Executive Director Datu Tungko Saikol accepted this challenge and vowed to give the region’s best efforts.
In the early morning of January 27, a tree growing activity was conducted and participated in by the Asec Lagunda, DENR IX and local government officials and residents of Dapitan City. The activity was held in Barangay Sto. Niño located within Jose Rizal Memorial Protected Landscape.
Afterwards, Asec Lagunda together with the DENR IX officials went to Aliguay Island Protected Landscape and Seascape for a community dialogue where DENR IX was able to present the upcoming programs and projects that will be implemented in the island. Asec Lagunda rallied for the support of the community residents and emphasized that government programs can only be effective with building linkages and partnership with stakeholders.
In light of the COVID-19 pandemic, safety and health standards set by the Department of Health (DOH) were observed in the conduct of all the above-mentioned activities. #
#DENRZamPen 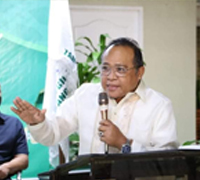 Key Officials and personnel welcome the assumption of Datu Tungko M. Saikol as Regional Executive Director for the Department of Environment and Natural Resources (DENR) in Region IX, Zamboanga Peninsula during a special convocation held yesterday morning at the DENR IX Lobby, Pagadian City.
On hand to welcome RED Saikol were EMB IX RD Alex D. Jimenez, MGB IX RD Hernani G. Abdon, ARD for Technical Services Ronald D. Gadot, ARD for Management Services Dante A. Oporto, PENROs, CENROs, Division and Section Chiefs.
RED Saikol was designated as Regional Executive Director for Zamboanga Peninsula under Special Order No. 2022-07 dated January 6, 2022 and signed by DENR Secretary Roy A. Cimatu.
In his message, he believes that Zamboanga Peninsula is both a historical and culturally diverse region as the presence of the Muslims, Christians, and Lumad is an evidence of a peaceful co-existence.
Director Saikol added that this office is an epitome of harmonious relationship of different tribes, religious and culture.
"I believe that the employees and officials of DENR Region IX are competent, dedicated and peace-minded people that anybody can rely on without fear of failure or feeling of uncertainty", as he addressed the different personnel present.
" As experts in your field of assignment and functions, it makes me confident to expect an efficient and effective governance for our environment and natural resources" he added.
RED Saikol reminded everyone to work hand in hand without any gaps and dispute to be able to lead the way for a successful implementation of projects, activities, and programs of the department.
RED Saikol is a true-blooded Mindanaoan as he hails from Cotabato City. He has held various Director and Assistant Director Positions in the DENR particularly in Region 12 and was also designated Deputy Minister of the Bangsamoro Autonomous Region in Muslim Mindanao (BARRM)'s Ministry of Environment, Natural Resources and Energy (MENRE).
Before his assignment here in Region IX, he served as Director of the Biodiversity Management Bureau (BMB), DENR Central Office. A critically endangered Philippine Eagle (Pithecophaga jefferyi) returns to its forest home today January 10 as it was freed by personnel from the Department of Environment and Natural Resources (DENR) Region IX in Godod, Zamboanga del Norte.
The female Philippine Eagle named Godod (named after the Municipality where it was recovered earlier)soared into the forest canopy to the cheers of onlookers composed of DENR IX officials headed by In Charge Office of the Regional Executive Director and Assistant Regional Director for Technical Services Ronald D. Gadot, Liloy CENRO Dionisio Rago, ZDN PENRO representative Almario M. Kaabay Jr., Godod Mayor Abel M. Matildo, Provincial Governor's Executive Assistant Joey Bernard, representatives from the Philippine Eagle Foundation (PEF), barangay officials, tribal leaders and residents.
Liloy CENRO Dionisio Rago narrates that Godod was retrieved by his personnel from an upland dweller last December in the said municipality. Accordingly, the eagle was caught accidentally in a trap intended for chickens. Thru the efforts of concerned citizens, the information reached his office and he immediately dispatched a team to effect its retrieval.
Godod was subject to physical and medical exam by veterinarians and personnel from the PEF. After declaring the bird fit and healthy, they immediately recommended for its release back into the wild. An intensive information campaign was conducted to community residents to inform them about the importance of the Philippine Eagle and why there is a need to protect it.
ARD Ronald Gadot said that the Philippine Eagle is an indicator species in terms of assessing the richness of biodiversity in an area. As the top predator, it makes its home where food is abundant. Thus, the mountain area in Godod where it resides harbors wildlife such as monkeys, hornbills snakes, flying lemurs, wild pigs, wild cats and a host of others which form a major part of its diet. The close canopy of the dipterocarp forest and its elevation makes it a perfect home for these eagles to thrive.
" There is a need to protect our national bird as it is already declared as critically endangered. In fact, an estimate of more or less 400 individuals exist in the wild. These endemic eagles are vulnerable to hunting, illegal wildlife trade, destruction of habitat to name a few, " Director Gadot added.
Lastly, he appealed for everyone to join hands in helping protect and conserve the Philippine Eagle for the legacy of the next generation.
The different tribal leaders and barangay officials pledged their support to the protection of the eagle Godod as its presence will assure them of national recognition and pride knowing that their place hosts a rare and endangered species.
In Zamboanga Peninsula, DENR IX has documented breeding Philippine Eagles in Baliguian, Zamboanga del Norte, Pasonanca Natural Park in Zamboanga City and in Midsalip, Zamboanga del Sur.
#tayoangkalikasan
#philippineeagle
#wildlifeconservation 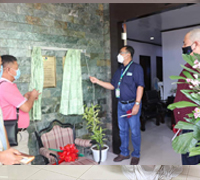 The Department of Environment and Natural Resources (DENR) Region IX had the blessing and inauguration of its newly constructed hostel at the DENR IX complex in Pres. Corazon C. Aquino Regional Government Center, Balintawak, Pagadian City last December 7, 2021.
In a message given by In-Charge Office of the Regional Executive Director Ronald D. Gadot he said that “this hostel is to house guests and DENR IX personnel coming from the field offices in the different parts of the region, whenever they have official work in Pagadian City”. He added that this will also provide comfort for the personnel while they are performing their duties.
The blessing of the hostel was officiated by Sto. Niño Cathedral Administrator Rev. Father Allan Onden after the ceremonial ribbon cutting by In-Charge Office of the RED Ronald D. Gadot and Provincial Environment and Natural Resources Officer (PENRO) of Zamboanga Sibugay For. Edgardo P. Montojo.
The event was witnessed by regional office Division Chiefs, PENR Officer of Zamboanga del Sur For. Diomides M. Pablo, ZDN PENR Officer Dr. Salahuddin A. Kaing, CENR Officer of Guipos For. Jose Mario E. Reyes, CENR Officer of Ramon Magsaysay For. Geoffrey S. Zayas, CENR Officer of Piñan Dr. Adelaida R. Borja, CENR Officer of Manukan For. George E. Laolao, CENR Officer of Liloy For. Dionisio B. Rago, CENR Officer of Siocon For. Rey A. Jalandoni, CENR Officer of Imelda For. Pilarito B. Montebon, CENR Officer of Kabasalan For. Dennis N. Catalan, and CENR Officer of Zamboanga City For. Ariel C. Barrientos.
The newly constructed hostel is a one-story building with an unfinished underground area with four rooms and can house a total of 13 personnel at a time.
Aside from its commitment in performing its mandate and providing quality service to its clients, DENR IX also ensures that the safety and comfort of its personnel is part of its primary priority.