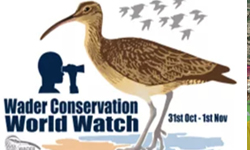 The Philippines, for the first time, participated in the Annual Wader Conservation World Watch of the Wader Quest Group through an entry submitted by the Department of Environment and Natural Resources (DENR) Region IX headed by Regional Executive Director Crisanta Marlene P. Rodriguez and Assistant Regional Director Dante A. Oporto together with PENRO Zamboanga Sibugay personnel.
Wader Quest Group Chair of the Board of Trustees Rick Simpson expressed his heartfelt thanks to the DENR-IX group for putting the Philippines in the global scene by participating in this annual event of monitoring migratory bird species occurring within the Sibugay Coastal Wetlands from October 31 to November 02 of this year.
RED Rodriguez said that DENR IX takes pride in this achievement to share that, because of this effort, DENR IX was requested by Wader Quest Group to serve as the coordinator for the Philippines in the succeeding events. This request will be channelled through DENR Central Office, particularly the Biodiversity Management Bureau, for their consideration, support and positive response.
Wader Conservation World Watch of the Wader Quest Group is an international event that is purposely celebrated to highlight waders and the problems they are facing, and also to celebrate the people who are involved, either professionally or voluntarily, in their conservation efforts. It lives with a message of “thank you” for the conservationist and “I care” from the participants, who in their simple gesture have shown their care for the species.
This year 53 countries participated with 489 observers (10 from PENRO Sibugay) with 167 reported species (Philippines reported 17 species). The organizers even featured in one full spread of its publication the photographs of Banded Wanders documented by ARD Oporto as well as selected photos of PENRO Sibugay CDS staff Jino Salvador.
Every year since 2014, on the first weekend of November the anniversary of the start of the Wader Quest, which occurred on the 1st of November, 2012,began to be celebrated. The wader all over the world has been declining. Herewith are highlighted facts about:
- 48% of known wader populations are in decline;
- 6 wader species are already extinct;
- 8 wader species are critically endangered;
- 4 of those are probably already extinct;
- 9 wader species are Endangered (2 added to the list recently);
- 9 wader species are Vulnerable;
- 29 wader species are Near threatened (6 added to the list recently);
- The Yellow Sea is being devastated;
- 80% of UK Northern Lapwings have disappeared;
- the Spoon-billed Sandpiper is heading for extinction;
- hay meadow nesting chicks are being destroyed by early mowing;
- thousands of waders are still hunted every year;
- Hooded Plovers still can’t find a place on the beach to breed;
- Wetlands are being drained at an astounding rate;
- 97% of Irish Breeding Eurasian Curlews have gone;
- Black Stilts only cling to existence due to captive breeding;
ARD Oporto said that the challenges among these key migratory species need to be addressed through timely public awareness and strong effort of conservation and that this event is a very remarkable platform towards the attainment of the conservation goals. 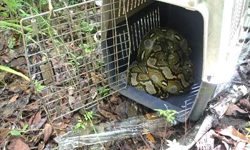 Dipolog City… Personnel from the Department of Environment and Natural Resources (DENR) Region IX through its Provincial Environment and Natural Resources Office (PENRO) of Zamboanga del Norte released a reticulated python (Malayopython reticulatus) in Cogon Ecotourism Park on December 1, 2020.
Dipolog City Police Officers PEMS Rev Marcojos, Corporals Louie Magsanay and Philip Eguia brought the snake to the PENR Office after it was surrendered to them by concerned citizens.
Accordingly, the wildlife was spotted and rescued by fisherfolks along the seashore of Sunset Boulevard, Barangay Miputak, Dipolog Ciy on November 28.
Initial assessments made by PENRO personnel on the python revealed that it was healthy and in good condition. It has an estimated length of 353 cm and diameter of 12.5 cm and weighed 20.4kg
The turn over of the said wildlife is an indication of the effectiveness of the information dissemination campaign on RA 9147 also known as the Wildlife Resources Conservation and Protection Act. Photo courtesy of PENRO Zamboanga del Norte. 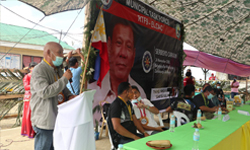 STO NIÑO, GUTALAC, ZN – At least 6, 174 forest and vegetable seedlings were distributed by personnel of the Department of Environment and Natural Resources (DENR) Region IX- Community Environment and Natural Resources Office (CENRO) of Liloy to the farmers and residents of Barangay Sto Niño, Gutalac, Zamboanga del Norte last November 26, 2020 during the Serbisyo Caravan of the Regional Task Force to End Local Communist Armed Conflict (RTF9-ELCAC).
The activity was conducted by the task force to address and support the needs of the Indigenous People in the community through a whole nation approach.
The said activity was participated by heads of offices and regional agencies headed by the Chairman of TWG-RTF9-ELCAC NICA IX Regional Director Ariel T. Perlado. Other participating agencies were DPWH, DOH, DILG, DA, DTI, NCIP, AFP, and DENR.
The vegetable seedlings (5,194) composed of Bell Pepper, Okra, Eggplant and Tomatoes were produced at DENR IX’s Mechanized and Modernized Forest Nursery (MMFN) in Baclay, Tukuran with the technical assistance of DA IX while the Mahogany seedlings (980) were propagated by the same nursery. 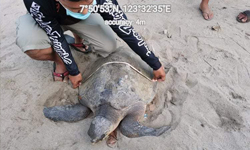 Tukuran, Zamboanga del Sur -- The Department of Environment and Natural Resources (DENR) Region IX through its Community Environment and Natural Resources (CENRO) Ramon Magsaysay personnel retrieved and released an Olive Ridley Turtle (Lepidochelys olivacea) on November 21, 2020 at Barangay Lower Bayao, Tukuran, Zamboanga del Sur.
The turtle was spotted by two concerned citizens along the coastal waters of Brgy. Lower Bayao and was immediately reported to the authorities.
Upon initial inspection and examination, it was found to be healthy and in good condition. It weighed about 40 kg and has a length of 71 cm and width of 69 cm. After proper tagging and documentation, it has been released back to its habitat.
The International Union for Conservation of Nature (UICN) classifies the Olive Ridley Turtle as Vulnerable due to the decrease of its population. Photo courtesy of CENRO RM 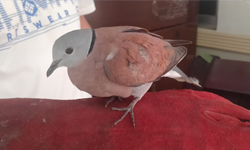 A red collared dove, locally known as tokmo, was rescued by Mr. Elijah C. Selem, a resident of Brgy. Dumagoc, Pagadian City, Zamboanga del Sur, last November 19, 2020.
Mr. Selem was walking about when he saw a dog playing with some object. When he was near the dog, he discovered that it was harming a bird. He immediately rescued the bird and discovered that it had an injury in its left wing. He suspected that the rescued wildlife was a victim of a slingshot. He immediately turned over the injured animal to PENRO Zamboanga del Sur.
The rescued fauna was then brought to the DENR-IX Wildlife Rescue Center in Baclay, Tukuran, ZDS where it will be rehabilitated before releasing it back to the wild.