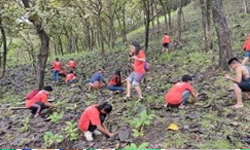 Department of Environment and Natural Resources (DENR) Region IX through its Provincial Environment and Natural Resources (PENRO) Zamboanga del Sur together with the Christian Youth Fellowship (CYF) conducted a tree growing activity in the Seed Production Area (SPA) in Barangay Tinotungan, Tukuran, Zamboanga del Sur on January 21, 2021.
About 150 seedlings were planted in the area, keeping a 2x3 meter spacing to ensure the healthy growth of the seedlings. There were around 25 participants from the CYF and PENRO ZDS who joined in the activity.
The SPA was established in 2013 to ensure the availability of planting materials in the area. It has a population of 685 Teak trees and land area of 4.0 hectares.
The said tree growing activity was held as a result of the DENR IX intensified community Information and Education Campaign (IEC) on environmental awareness, conservation and protection.Photos courtesy of PENRO ZDS 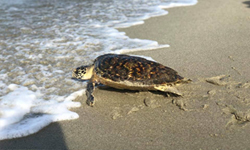 Siocon, Zamboanga del Norte.. Community Environment and Natural Resources Office (CENRO) of Siocon together with the Municipal Fisheries and Aquatic Resources (MFAR) released a juvenile Hawksbill turtle (Eretmochelys imbricata) at Dulongin Beach, Barangay Matiag, Siocon, Zamboanga del Norte on January 18, 2020.
The sea turtle was caught entangled in the fishing net of Ms. Lorena Torrefranca, a local fisherfolk in the area. She immediately rescued the turtle and reported the incident to MFAR who then coordinated with CENRO Siocon for the proper assessment and releasing of the said wildlife.
Upon evaluation the Hawksbill turtle was found healthy and in good condition. It weighed around 3kg, has a width of 31.1 cm and length of 35.2 cm. After proper documentation, it was released back to its natural habitat.
The International Union of Conservation of Nature (IUCN) has listed the Hawksbill turtle as critically endangered based on the 80% decline of its population over the generation.
The Department of Environment and Natural Resources (DENR) IX will continue to conduct Information Education and Communication (IEC) campaign to spread more awareness on the importance of conserving and protecting our wildlife and natural resources. 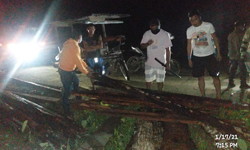 Department of Environment and Natural Resources (DENR) IX through its Community Environment and Natural Resources Office (CENRO) of Siocon, Zamboanga del Norte apprehended 45 pieces or 261.17 board feet of undocumented Mahogany lumber and impounded two (2) tricycles which were used as conveyance in Sitio KM 10, Barangay Kilalaban, Baliguian, Zamboanga del Norte on January 17, 2021.
CENRO Siocon personnel were conducting forest patrol when they accosted two men loading lumber products in their tricycles.
Upon investigation, the suspects were not able to present any legal document for the lumber which is in violation of Sec. 77 of P.D. No. 705 also known as the Forestry Reform Code of the Philippines.
This prompted the office to seize the lumber and impound the conveyances.
The seized lumbers and vehicles are now in CENRO Siocon’s impounding area for safekeeping and further investigation. Appropriate charges will also be filed against the two suspects.
DENR IX reminds everyone that cutting, gathering, collecting removing forest products without proper documents is punishable by law.
For reports on any environmental law violations, you may reach us through our FB page DENR Zamboanga Peninsula, hotline at 09481471250, landline at (062) 945-0870 and/pr email at This email address is being protected from spambots. You need JavaScript enabled to view it..
Photos courtesy of CENRO Siocon. 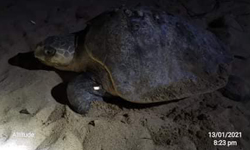 Pagadian City, Zamboanga del Sur.. Personnel from the Community Environment and Natural Resources Office (CENRO) of Ramon Magsaysay released an Olive Ridley turtle (Lepidochelys olivacea) on January 13, 2021 at the coastal shores of Barangay White Beach, Pagadian City.
The said turtle was seen along the sea shore of Purok Lapu-Lapu, Barangay White Beach, Pagadian City by Mrs. Ridgelyn Mondelar who then immediately reported it to Barangay Kagawad Mr. Rolando Bongcawil who in turn called CENRO Ramon Magsaysay.
The turtle was examined and was seen to be healthy and in good condition. It weighs 40kg and has a length of 63cm and width of 65cm. After proper tagging and documentation, it was released back to the sea.
Olive Ridley turtles are listed as vulnerable by the International Union for Conservation of Nature (IUCN) since there has been a significate decrease in its population due to marine pollution and other factors which affects the turtle’s natural habitat.
DENR IX encourages the public to immediately report any sighting of wildlife concerns for the agency to be able to promptly conduct rescue and retrieval operations.
Photos credits to CENRO RM 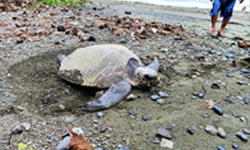 Manukan, Zamboanga del Norte… Community Environment and Natural Resources Office (CENRO) of Manukan translocated 81 Olive Ridley (Lepidochelys olivacea) turtle eggs to the marine turtle hatchery in Barangay Dohinob, Roxas, Manukan, Zamboanga del Norte on January 11, 2021.
The mother turtle was spotted laying its eggs at the coastal area of Barangay Easy Poblacion by Mr. Carlmelito Jimenez. He then immediately reported it to CENRO Manukan personnel for proper documentation and handling of the turtle eggs.
Upon assessment and inspection of the nesting site, the CENRO Manukan team decided to transfer the said eggs to the marine hatchery in Barangay Dohinob, Roxas, Manukan for safe keeping and higher chance of survival until it hatches.
It is expected that there will be an increase of mother turtles nesting their eggs in the area since November to March is observed to be the nesting season in Zamboanga del Norte.
Photos courtesy of CENRO Manukan