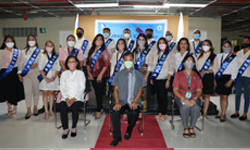 Department of Environment and Natural Resources (DENR) Region IX conducted its ceremonial graduation for employees who successfully completed Environment Natural Resources Academy (ENRA) Basic Course on December 14, 2021 at DENR IX Lobby, Balintawak, Pagadian City.
There were a total of 49 graduates coming from two batches, 24 coming from the batch Erudite and 25 from batch Conservationist. Communication Development Officer (CDO) II Marianne F. Tapales was hailed Class Valedictorian for Erudite and Forester II Cliff R. De Leon for Class Conservationist.
In a message given by Assistant Regional Director for Management Services Dante A. Oporto in behalf of In-Charge Office of the Regional Executive Director Ronald D. Gadot he said that, "the true purpose of education and its role is to uplift people and expand their horizons". He added that educating fundamentally means broadening your limitations, enlarging your capabilities and widening your future opportunities.
The ENR Academy is a specialized program designed for DENR employees to get the best transfer of technical knowledge and skills. It aims to enhance the knowledge of participants in the fundamentals of ENR Laws as well as Department's programs and priority projects.
#TayoAngKalikasan
#DENRZamPen
#ENRAGraduation 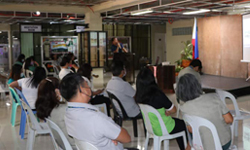 The Department of Environment and Natural Resources (DENR) IX Zamboanga Peninsula had its annual general assembly on December 13, 2021 via blended face to face at DENR IX lobby, Balitawak, Pagadian City and virtual through ZOOM teleconferencing.
The annual general assembly is conducted usually at the end of the calendar year which aims to inform DENR IX personnel on the status of the physical and financial accomplishments of the region, this is to make them aware of their performance and on areas for improvement for the next year.
#TayoAngKalikasan
#DENRZamPen 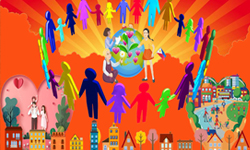 In celebration of the 18-Day Violence Against Women Campaign with the theme: “VAW Free Community Starts with ME”, the Department of Environment and Natural Resources (DENR) Zamboanga Peninsula through its Gender and Development (GAD) conducted the VAW Digital Poster Making Contest, which aims to promote awareness on Safe Spaces Act or R.A. 11313.
The entry from Provincial Environment and Natural Resources Office (PENRO) of Zamboanga del Sur was hailed the winner receiving Php 5,000. Followed by 2nd place from Community Environment and Natural Resources Office (CENRO) of Zamboanga City receiving Php 4,000 and having a tie in 3rd place are PENRO of Zamboanga del Norte and CENRO Liloy receiving Php 3,000 each.
DENR IX GAD is grateful to everyone who supported the 18-Day VAWC and hopes that the support will continue until we achieve a VAW Free Community.
#DENRZamPen
#VAWC2021
#VAWFreeCommunityStartswithMe
#FilipinoMarespetoSafeSpacesKasaliTayo 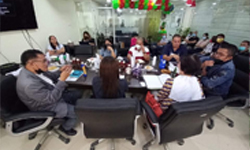 Zamboanga del Norte… The Department of Environment and Natural Resources (DENR) Region IX In-Charge Office of the Regional Executive Director Ronald D. Gadot together with Community Environment and Natural Resources Office (CENRO) of Piñan CENR Officer Adelaida R. Borja conducted a drafting of the Memorandum of Agreement (MOA) with Zamboanga del Norte Electric Cooperative (ZANECO) on December 8, 2021 at ZANECO office in Dipolog City, Zamboanga del Norte.
The purpose of the MOA is for the Adoptation of the Enhanced National Greening Program (eNGP) site in Tuburan, Sergio Osmeña which will focus on the development, livelihood, and replanting the area.
Present during the drafting was National Electrification Administration (NEA) Project Supervisor of ZANECO Atty. Rhet Rosewell F. Mislang and ZANECO board members.
DENR IX will continue to forge partnerships with different institutions to fulfill its committed to its 10 priority programs one of which is the eNGP. It also urges everyone to do their part in sustaining, protecting and conserving our environment and natural resources.
#TayoAngKalikasan 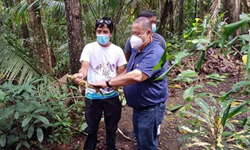 The Department of Environment and Natural Resources IX Regional Wildlife Rescue Center (RWRC) released seven (7) rehabilitated wildlife in Cogon Ecotourism Park, Dipolog City last November 23, 2021.
The activity was spearheaded by DENR 9 In-Charge, Office of the Regional Executive Director Ronald D. Gadot together with CENR Officer George E. Laolao of Manukan, ZDN, City ENRO Mercedita Guerrero and City Tourism Officer Cecille R. Bilog of Dipolog City, In-Charge Judelyn M. Laput of Cogon Ecotourism Park, Brgy. Captain Paquito L. Paño of Cogon, Dipolog City and personnel from Dipolog City ENR and Tourism Office. Also in attendance was Dr. Ernest Jan Duldulao of ZDS-Provincial Veterinary Office and CENRO Manukan personnel.
Released back to the wild were one (1) Yellow-headed Water Monitor Lizard (Varanus cumingi), one (1) Serpent Eagle (Spilornis sp.) and five (5) Brahminy Kite (Haliastur indus).
Most of the species mentioned were previously rescued and retrieved in Zamboanga del Norte and were rehabilitated at the Regional Wildlife Rescue Center in Baclay, Tukuran, Zamboanga del Sur.
The DENR DAO No. 2019-09 listed the Yellow-headed Water Monitor Lizard as Other Threatened Species while the Serpent Eagle and Brahminy Kite as Other Wildlife Species. The International Union for Conservation of Nature (IUCN) listed the three (3) species as Least Concern.
Distribution of fliers among the key officials and personnel of Dipolog City ENR and Tourism Office was also conducted for them to be informed of the “dos and don’ts” when encountering the released wildlife species in Cogon Ecotourism Park.
Since April 2019, the RWRC has been fully functional with its major operational activities of rescue, rehabilitate and release of wildlife species.
In partnership with the Department of Agriculture IX and the Zamboanga del Sur Provincial Veterinary Office headed by Dr. Anita J. Chua, the RWRC has been providing medical attention, shelter and rehabilitation to the rescued wildlife prior to their release back to their natural habitat. As of November 2021, 115 heads of wildlife have been released by the RWRC since its the beginning of its operational status.
Photos Courtesy of CENRO Manukan
#saveourwildlife
#wildlifeconservation
#TayoAngKalikasan