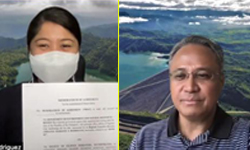 The Department of Environment and Natural Resources IX inks partnership with the Society of Filipino Foresters, Inc for the establishment of a wood gallery in the DENR IX Regional Office in Pagadian City during a virtual signing ceremony held on September 2, 2021.
SFFI President Tom Valdez said that he is looking forward to this initiative with the DENR IX, especially since that this will be the first wood gallery that will be established in DENR regional field offices nationwide. This will feature various wood samples of tree species especially those that are endemic to the region and/or threatened species.
On the other hand, DENR IX Regional Executive Director Crisanta Marlene P. Rodriguez, who conceptualized the initiative, said that the establishment of the wood gallery will pursue the goal of raising awareness on our endemic and threatened species here in Zamboanga. "Not only will we increase public appreciation, we can also leverage this initiative in encouraging the passing of policies and legislation -- both national and local -- that would provide for the protection and conservation of our forests and tree species."
#DENRZamPen
#TayoAngKalikasan 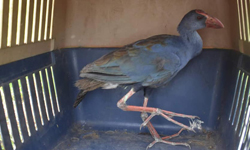 Dipolog City, Zamboanga del Norte - Personnel from the Department of Environment and Natural Resources (DENR) Region IX through its Provincial Environment and Natural Resources Office (PENRO) of Zamboanga del Norte rescued and released a Philippine Purple Swamphen (Porphyrio pulverulentus) in the wetland area of Barangay Sinaman last August 19, 2021.
The waterbird was sighted walking alone in the front yard of Mr. Victor J. Laput near the Dipolog Public Cemetery at Barangay Estaka. Mr. Laput thought it was one of his neighbors’ chickens as they often visit his yard early in the morning. However, as he looked closely, he saw that its features are uncommon to domesticated poultries. He decided to turn it over to personnel of ZDN PENR Office for proper care.
Initial assessment made by PLO III Renerio Acama, OIC-Chief Monitoring and Enforcement Section of PENRO-ZDN and EMS I Nesse Cyringe Pagaran on the Purple Swamphen and revealed that it was in good condition and suitable for immediate release back into its natural habitat.
DENR is cautioning the public not to handle or touch migratory wetland birds with their barehands as these wildlife might be carriers of contagious diseases such as bird flu.
A Philippine Purple Swamphen inhabits marshy, vegetated freshwater bodies such as swamps, rivers, and lakes and commonly walks in pairs or small groups. It is listed by the International Union of Conservation of Nature (IUCN) as least of concern but should be fully protected and public awareness of the species and its status should be raised.
#saveourwildlife
#TayoAngKalikasan
Photos by PENRO ZDN 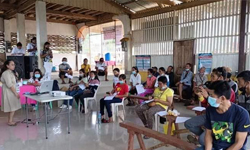 The process in empowering upland beneficiaries continue as the Community of Environment and Natural Resources (CENRO) of Guipos, Zamboanga del Sur assisted two (2) National Greening Program - Peoples Organizations in their Pre-Registration Seminar on Cooperativism conducted by the Cooperative Development Authority (CDA) IX last August 11, 2021.
The officers and members of San Isidro Farmers Association and Singclot Farmers Association attended the one (1) day seminar at San Isidro Barangay Hall, San Miguel to signify their intention to become cooperatives.
Guipos CENR Officer Mario Reyes said, in a message delivered by CBFM Coordinator Grace Bolaño, that this seminar is the first step that the POs need in order for their association to be registered as cooperatives.
"Being registered as a cooperative will grant them more opportunities and privileges in terms of economic development," CENRO Reyes said.
Cooperative Development Specialist II Rosylie S. Balungcas of CDA IX conducted the seminar and assured everybody that their office is ready to provide technical assistance and guide these associations in becoming a success someday.
#NGP
#Cooperativism 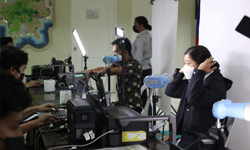 Pagadian City – In support to the Philippine Statistics Authority (PSA), Philippine Identification System, personnel from the Department of Environment and Natural Resources (DENR) Region IX regional office and Provincial Environment and Natural Resources Office (PENRO) of Zamboanga del Sur has registered to avail the Philippines Official National Identification Card.
DENR IX and PENRO ZDS requested for an appointment with PSA in Pagadian City for the registration of its personnel to be done within the office premises due to the COVID-19 crisis, as well as not to hamper any government service during the time of registration.
More than 500 personnel has collectively registered for the Philippine Identification System. An estimated 200 personnel from PENRO ZDS registered on Aug. 3, 2021 and an estimated 300 personnel from DENR IX regional office registered on Aug. 6 and 7, 2021.
The Philippine Information System aims to establish a single national ID for all Filipinos and resident aliens, which shall be a valid proof of identity, as a means of simplifying public and private transactions.
DENR IX encourages everyone to register to the Philippine Information System to be able to have easier and simpler transaction in government offices, enrollment in schools, opening of bank accounts and other transactions.
#DENRZamPen
#NationalID
#PSA

Community EnCENRO Guipos conducted a lecture on Geohazard to the CBFM-CARP beneficiaries in Tubod, Lakewood, ZDS 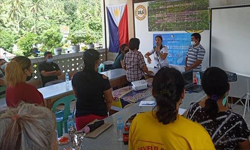 In celebration of the National Disaster and Resilience Month 2021 with the theme “Tamang Pamamahala’t Kahandaan, Kaalaman at Pagtutulungan sa Sakuna at Pandemya’y Kalasag ng Bayan”, the Community Environment and Natural Resources Office (CENRO) of Guipos conducted a lecture on Geohazard to the CBFM-CARP beneficiaries in Tubod, Lakewood, Zamboanga del sur.