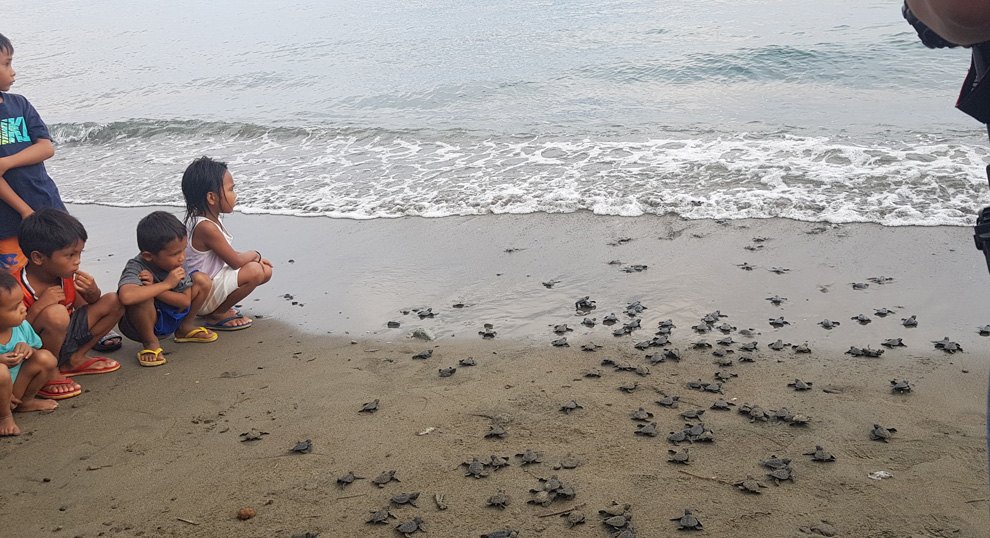 The Department of Environment and Natural Resources (DENR) has released more than 500 hatchlings of marine turtle or pawikan in the waters of Saranggani Bay last May 16 at around 5:30 in the afternoon.

On releasing the hatchlings, Tamoria called on the coastal communities of Saranggani to help in protecting and conserving their coastal areas and be responsible with their wastes.

“It is important that we take care of our marine ecosystem. I call on the communities to help us in protecting and conserving our coastal areas. Let us be responsible in managing our respective wastes. There are several reported stranding of pawikan and this indicates that there is something wrong with our coastal environment,” Tamoria said.

He also explained the reason for the release of the hatchlings in the late afternoon was to provide them a greater chance of survival. “Accordingly, only one (1) percent of the released sea turtles is expected to survive into adulthood,” he said.

Belonging to the species of Olive ridley,the baby pawikans, all 528,were hatched at the MaasimPawikan Hatchery in Maasim town, constituting the biggest number of hatchlings ever recorded since the hatchery’s establishment in 2015.

Tamoria also told the local residents who came to witness the activity that the journey of the young sea turtles is “not easy” as these are threatened not only by the presence of predators in the ocean but also by pollution and plastic wastes. “They may be eaten by big fishes and sharks, or they may ingest plastic waste thrown into the ocean,” he said.

For his part, Robles said that the female pawikanusually returns to its birthplace to lay eggs in the next 20 to 25 years.

“We let pawikan hatchlings to crawl into the sea. This will help them remember where they come from. They imprint on the unique magnetic field of their birthplace and the female ones use this information to return to their birthplace to nest,” Robles said.

The shores of Barangay Lumasaland the nearby communities are known nesting sites of sea turtles.

Olive ridley, also known as the Pacific ridley, is the second smallest and most abundant species of sea turtles in the world. Itthrives in warm and tropical waters, primarily in the Pacific and Indian Oceans. As to its conservation status, Olive ridley is vulnerable to extinction thus its possession and deliberate killing is punishable under Republic Act No. 9147, also known as the Philippine Wildlife Resources Protection and Conservation Act.###