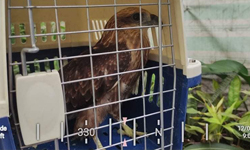 Zamboanga City.. Department of Environment and Natural Resources (DENR) Region IX through its Community Environment and Natural Resources Office (CENRO) of Zamboanga City retrieves one (1) juvenile Brahminy Kite (Haliastur indus) in Barangay Culianan, Zamboanga City on July 11, 2021.
The wildlife was spotted by Ms. Berna Fercol and Baby Lonia Barrios along their residence in the said barangay. They immediately informed CENRO Zamboanga for the proper disposition of the bird.
Upon evaluation the bird was in good and healthy condition, it weighs 600 grams and has a wing span of 60 cm. The wildlife is now under the custody of CENRO Zamboanga City for temporary protection and further evaluation before its release back to its natural habitat. 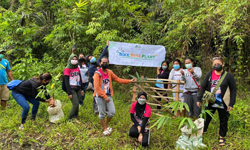 Community Environment and Natural Resources Office (CENRO) of Siocon headed by its OIC, CENRO Rey A. Jalandoni conducted a bamboo planting activity at Barangay S. Cabral, Siocon, Zamboanga del Norte on June 25, 2021 in celebration of Philippine Arbor Day and 158th Anniversary of Philippine Forestry Service.
The activity was attended by 30 personnel of CENRO-Siocon including its 13 Registered Foresters and Barangay Officials of S. Cabral. They planted approximately 200 bamboo culms.
Bamboo is considered an ideal substitute for the supply of timber resources because of its many uses and marketability as wood, and it is a suitable reforestation species that could provide both livelihood and environmental protection in upland communities and watershed areas.
#TayoAngKalikasan
#arbordayph2021 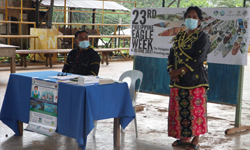 Indigenous Peoples (IPs) of Barangay Sianan, Godod, Zamboanga del Norte express their elation on how the government recognizes their role in wildlife conservation within their ancestral domain as the Department of Environment and Natural Resources (DENR) IX, through its Community Environment and Natural Resources Office (CENRO) of Liloy headed by CENRO Dionisio Rago, conducts an information campaign in their barangay last June 9, 2021 to promote the celebration of Philippine Eagle Week.
Timuay Florencia Gaas, Tribal Leader of the Sianan Subanen Tribal Association, said that its high time for government, particularly the DENR, to know that the IPs are ready to help in wildlife conservation efforts considering that they are living in the area.
" We pledge our support to help in Philippine Eagle conservation in our area", Timuay Gaas added.
CENRO Rago said that the information campaign aims to strengthen public awareness on the significant role of Philippine Eagle in the forest ecosystem per Presidential Proclamation No. 79, as well as, to generate unified and concerted efforts among the IPs to ensure the protection and perpetuation of the species within the barangay.
" Barangay Sianan has been known for sightings of a Philippine Eagle in the area by local IPs and its important for them to know the importance and significance of this endangered species so that they can become our partner for its protection," CENRO Rago said.
Incidentally, the information activity coincided with the celebration of Philippine Eagle Week (June 4-10) with the theme " The Philippine Eagle and Indigenous Peoples; Protecting our Forests, Protecting our Future".
The CENRO team also lectured on the Philippine Eagle as well as R. A. 9147 otherwise known as Wildlife Resources Conservation and Protection. IEC materials regarding these topics were also distributed. They also gave additional posters on the proper disposal of PPEs to be posted in their respective tribal office.
The Philippines Eagle is endemic in our country and is one of the largest eagles in the world. It is facing a Critically Endangered status according to the International Union of Conservation of Nature (IUCN). Despite of it being named as the country’s national bird, its species is threatened by destruction of its natural habitat as well as illegal hunting. 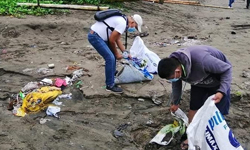 With this year's theme: "The Science we Need, for the Ocean we Want", Community Environment and Natural Resources Office (CENRO) of Manukan spearheaded the coastal clean-up together with 120 participants coming from the Local Government Unit of Jose Dalman, the Philippine National Police, Bureau of Fire Protection, Poblacion's Barangay Officials and coastal residents along its shoreline.
A total of 250 kilograms of trash were collected consisting mostly of plastics, ice wrappers, and other household wastes, which was brought to the Municipal Material Recovery Facility (MRF) for proper segregation and disposal.
To wrap up the activity, a short program and Communication, Education, and Public Awareness (CEPA) campaign on the significance of the Ocean and RA 9003, otherwise known as the "Ecological Solid Waste Management Act" was conducted to increase the level of awareness and behavioral change among the stakeholders on why we need to protect, conserve and preserve our Ocean and the proper disposal of non-biodegradable wastes particularly plastics which end up to the ocean.
It also aims to solicit support and cooperation from the community to ensure effective environmental protection which is everyone's concern.
Photo by CENRO MANUKAN, ZDN
#TayoAngKalikasan
#WeArePartOfTheSolution
#BiodiversityPH 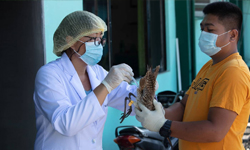 The DENR-CENRO Kabasalan rescued a Far Eastern Curlew (Numenius madagascariensis), a migratory bird categorized as endangered by the International Union for Conservation of Nature (IUCN) at Barangay La Paz, Naga, Zamboanga Sibugay. The bird is banded with a yellow flag at the right tibia that was inscribed with "E1" and a ring on the left tarsus with "INFORM WILDLIFE GPO BOX 8 CANBERRA 2601 AUSTRALIA 091-20737 August 9, 2009, near Broome, NW, Australia.
The bird is kept at the PENRO Zamboanga Sibugay Wildlife Holding Facility for further observation and health assessment before its release back to the wild.
#TayoAngKalikasan
#WeArePartoftheSolution
#IDBD2021
#samotsaringbuhay
#BiodiversityPH